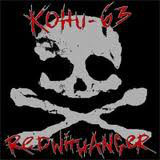 Label: Assel records – ASSI 017, Stay Free Underground rec.
Format: vinyl,  LP, Album
Released: 2006
Kohu-63 is a punk band from Tampere, Finland. The band was founded in the late 1970s and their first EP came out in 1981. They released their debut album in 1982 but soon after they had to have a long break because their singer Lättä was sentenced to jail. The band is still active, but there is only one member in the current lineup who was in the band also in the 1980s.

Comes with a lyric sheet.
Cover versions have translated or updated lyrix.
B11 not listed anywhere,the insert says the song is performed by members of Kohu-63 and Red With Anger