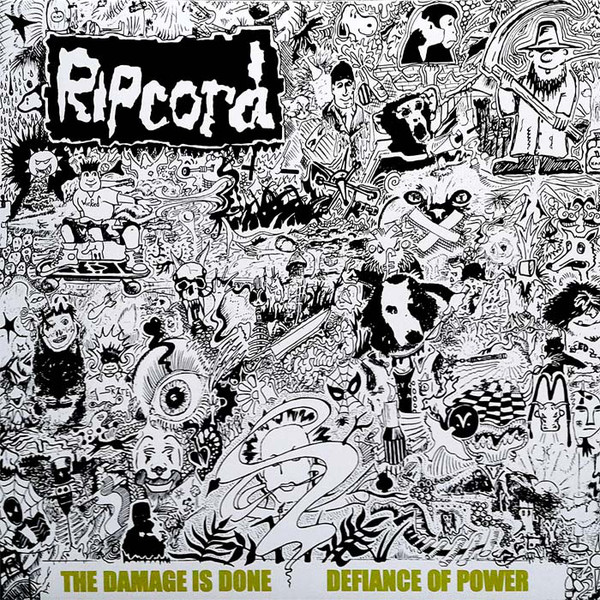 This material has been out of print on vinyl for nearly 15 years. This is the shit, though it is nothing more than just a raw thrash attack. It contains all the tracks from their selfproduced flexi and their first album on Manic Ears. RIPCORD definded the english hardcore between 1984 and 1988. Along with HERESY, the STUPIDS, DOOM and EXTREME NOISE TERROR, they were one of the best bands that England had to offer at that time when Cal had gotten his balls sewed on again and the technicolor punks from Kings Road became extinct.

RIPCORD, though from Weston-Super-Mare would have loved being a D.C. (TEEN IDOLS / G.I.) or Boston band (S.S.D. / D.Y.S.), but they were one of these bands that could easily outrival their paragons. Their greatest recording event was the John Peel Session (featured on the „More Songs“ CD resp. later on the Discography Pt. 3 LP). The entire RIPCORD catalog was re-released on 3 vinyl LPs in cooperation with Epistrophy in 2002 with a repress in 2014. Steve Hazzard and John later joined SPITE, John and Jim formed DUMBSTRUCK. Steve, Baz and John later also played in VIOLENT ARREST while Jim joined EXTINCTION OF MANKIND.