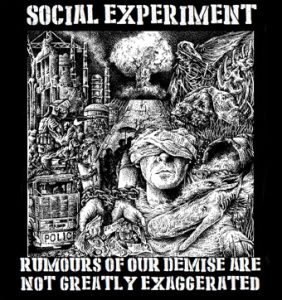 LP Social Experiment ‎– Rumours Of Our Demise Are Not Greatly Exaggerated

Label: Blind Destruction Records ‎– BDRLP004, Maloka, Missing The Point, Mass Productions
Format: vinyl, LP
Released: 2018
The only positive thing to come out of the demise of south Wales punk rock legends This System Kills is the fact that we now have three bands where we once we had just the one. Social Experiment are the first of these new bands to show their hand, and boy oh boy have they come up trumps with this debut eight tracker.

Expertly produced by ex-Dub War and current Bad Sam guitarist Jeff Rose the sound of Social Experiment is nothing less an all-out assault on your senses, and from the almost gothic throb of opener ‘Unlock The Cage’ to the metallic pounding thrash of ‘Tilikum’ that closes the record the 23 minutes you spend in the company of Puddle (vocals), Newt (bass), Nicky (drums) and Paul (guitar and backing vocals) are some of the most exhilarating you’ll spend with any UK hardcore band right now.

Given the ferocity of the band coupled with the bang on point social politics of the record, this is not exactly what you would call “a sit-down and relax after work type of record.” In fact, it’s more of a record for those who like to feel like you’ve just done eight rounds down at your local Fight Club but this time around it’s something you really must talk about, and not unlike those early records by the likes of Subhumans, Discharge and Extreme Noise Terror.

Eight tracks, eight short sharp shocks to the system and a virtual bloody nose for your troubles ‘Rumours of Our Demise Are Not Greatly Exaggerated’ is one of the most brutal records I’ve heard this year.