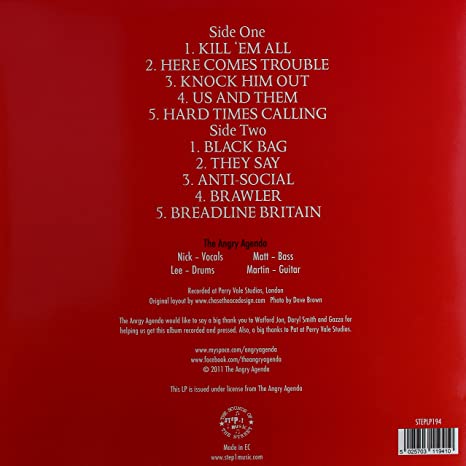 Here comes trouble, straight from the South East of England it’s The Angry Agenda with their debut album… “Here Comes Trouble”! Actually, ‘trouble’ already came (out) in 2011 as a self-released CD-R, but long lasting British label Step-1 Music finally took the courtesy to release this agenda of anger on vinyl!

What you get is ten barroom brawlers going at it at 45RPM, that are best described as a mix between The London Diehards, GBH and a healthy dose of Motörhead worship! So time to get yourself into your boots and braces or studs and leather and raise your fist to sing-along to violent tracks like “Kill ‘Em All”, “Here Comes Trouble”, “Black Bag”, “Anti-Social” and “Brawler”! But it isn’t just British anger and rage on “Here Comes Trouble”, because songs like “Hard Times Calling” or “Breadline Britain” could be straight of a The Beltones or a Those Unknown record, if their members were Londoners that is, proving the album’s variety in sound.

The United Kingdom really seems on the rise the last couple of years when it comes down to Oi! music and does not necessarily needs to lean on it’s old, but fantastic, glory anymore! The Angry Agenda can be added to this list and I’m glad Step-1 Music issued “Here Comes Trouble” on vinyl, despite it being over three years old already! Take note that only 250 copies of this LP were pressed, 50 copies on black vinyl, 100 on red vinyl and the remaining 100 copies on clear vinyl with red and blue splatter.